"Malkorok went down on 10/28/2013, the boss looks like a ping blob because of Taij being a dumb ass and did something to his dead body before we took the picture, I think we should publicly reprimand him :)" - An almost anonymous ET Officer 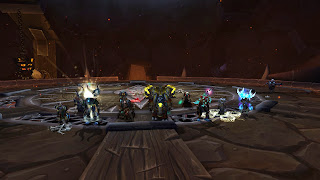 Congrats ET (but not Taij the screen shot robber) on getting to 9/14!
Posted by Unknown at 9:58 PM